The dawn of computers has rapidly transformed our lives in the last two decades. Things which we can do today were only dreams a decade ago. Remember the first time you used a computer? How excited you were to lay your hands on this machine and if you were a kid then you definitely must have spent hours on a painting application colouring a digital canvas with lots of colour and creativity!


Fast forward to 2012 and the humble paint app has been overtaken by serious, technological marvels like Adobe Photoshop, Corel and a host of other applications. These mean machines and software’s have spawned a new generation of artists, armed with a tablet computer and an electronic paintbrush; these artists are charting into new worlds through their work and in the process have created a new form of art – the digital art. Discovering-Mumbai (DM) came across one such upcoming, extremely promising, unbelivably talented artist - Vasundhara Prakash.


Vasundhara who is a script writer by profession and is currently working on a movie which is supposed to go into production by end of this year, did not start off wanting to be an artist. She is also working on two more scripts. Vasundhara did her Bachelors in Philosophy from Lady Shri Ram College in Delhi and Masters in Arts and Aesthetics from JNU, Delhi. With her thirst for knowledge not satiated she set sail for the distant land of America for her PHD in communication at the University of California, San Diego. However, things didn’t turn out the way she wanted and she came back to India. It was at this point of time that the lure of Bollywood started to beckon her and she decided to pursue a career in Bollywood.


Her first assignment in Bollywood was working as the Assistant Director on a film; she also worked on an Indo-French documentary ‘India by Song’ which was aired on TV and also went to Cannes. Later she went into advertising, again as a Director’s Assistant, but she didn’t really enjoy the stressful world of advertising. This is the time when she started writing movie scripts. So how did Vasundhara, the script writer, become Vasundhara the artist? It happened two years ago when she was pondering over a very peculiar issue; the question was how to make her Facebook profile pic stand out. This led her down a path which resulted in her discovery of softwares like Dotmatrix, Pixelmator and Photoshop. Initially she was a bit intimidated by these softwares but she quickly worked her way around them and started churning out some great pictures. She started out working on her own pictures and later she also tried her hand at manipulating pictures of her friends. When her friends saw her work they were amazed and started using her works as their profile pictures on Facebook. Soon what had started out as a pastime started to develop into a passion. Her initial attempts were simple manipulations of photographs. Later she started adding different elements along with the photos and her distinctive style started to develop.


Vasundhara’s digital artworks are a blend of photographs and drawings, and a host of other elements. She mixes these elements elegantly to create stunning visuals. Her works are peppered with lots of bright colours. A female subject is central to almost all of her paintings. When asked to explain one of her works she replied, “My paintings are very instinctive, I do not think about a particular theme when I draw. I don’t even label my works as it makes them very restrictive and makes people think about the work in a particular way”. Vasundhara has made almost 160 pieces of digital paintings so far, out of which she is displaying 15 at her first solo exhibition at ‘The Bagel Shop’ in Bandra. The exhibition runs till July 15th. She is visibly excited about her exhibition, because when she started out, the thought that one day she would be exhibiting her work to the public never crossed her mind. A lot of her excitement also stems from the positive response that she has been receiving from people. So far she has been successful in selling eight of her fifteen works and a lot of requests for reprints of these sold works. A lot of people have told her that her works are actually underpriced!


Friends and family were the ones who motivated her in going public, they also happen to be the ones who constantly give her the feedback she needs. Her brother, in particular, is one of her biggest critic. The first time she displayed her work was at a fair at Mocha Mojo, Bandra. She had displayed three of her works at Mocha Mojo alongside a host of other artists. One of her works has been used as the cover of a book and she has also designed one specifically for a book. Post her solo exhibition she has got an offer from a lady in Denmark who organizes online art exhibitions. She is also looking for other venues in Mumbai to display her works but she admits that she would not really like her work to be put up in some art gallery. As an arts student she knows that it can get very intimidating for people to go to a gallery. She is grateful to 'The Bagel Shop' for providing her the opportunity to display her works with such openness and warmth.  There are very few genuine places in Mumbai, like 'The Bagel Shop', which provide a platform to upcoming artists for presenting their work 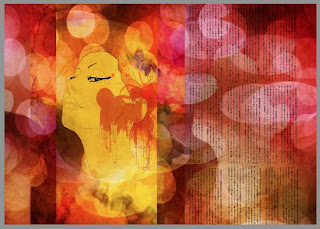 The artist, who was never really interested on a real paintbrush and canvas, says that in India digital art is not given its due credit. A lot of people still don’t take it as a serious form of art. People do not understand the time, creativity and hardwork that goes into making a digital painting. But such perceptions are not going to let her down, for sure.  Post her successful exhibition, her confidence is sky high and all that she is thinking about is taking her passion for painting to the next level. Vasundhara wants to continue doing both scripts and digital paintings, she really can’t choose between the two. With her movie ready to go into production we understand the excitement that she is going through. Her successful exhibition must have taken that excitement to cloud nine levels. We wish her all the best for her movie project and hope to see more of her works soon.
You can check out more of Vasundhara's works on her flickr page - http://www.flickr.com/photos/vasundharaprakash/
or at the Bagel Shop at Bandra before her exhibition ends on July 15.

For advertising on 'Discovering Mumbai' write in to us at discoveringmumbai@gmail.com with the subject line 'Advertising enquiry'

You can get in touch with us at discoveringmumbai@gmail.com